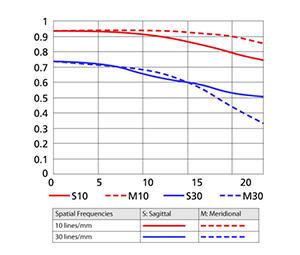 With a compact, lightweight design, the AF-S DX Nikkor 35mm f/1.8G provides the high reproduction capability and picture quality for which Nikkor lenses are renowned at an affordable price. The ring type SWM offers quiet AF operation. Although all lens groups shift during focusing, the front element and filter mount do not rotate and the barrel length does not change, which is useful when using filter mounted SB-R200 wireless remote speedlight units.

The AF-S DX Nikkor 35mm f/1.8G optical design allows a different look and feel to images taken with zoom lenses, and it’s dimensions are ideal for discrete snapshots and landscape shooting with a picture angle that approximates that of the human eye. With it’s rounded seven-blade diaphragm opening, out-of-focus elements appear more natural. When mounted on a DX-format SLR, the picture angle is the 35mm equivalent focal length of 50mm.

– Close focusing to 1 foot for creative perspectives and versatility

The AF-S Nikkor 35mm F1.8G DX is a lens which certainly caused a degree of dismay on it’s release, with many Nikon fans disappointed by the decision to make it compatible with the DX format only. However, the main benefit of that decision is plain for all to see – even at it’s introductory price the lens costs rather less than the venerable AF-Nikkor 35mm F2.0D, despite the addition of an AF-S motor to allow autofocusing on Nikon’s entry-level D40/D40X/D60 bodies. It’s also less than half the price of the few other DX format standard primes currently on the market (Such as the Pentax 35mm F2.8 Macro, Tokina 35mm F2.8 Macro and Sigma 30mm F1.4 EX DC HSM), so Nikon has managed with this lens to produce the first genuinelly inexpensive fast standard prime designed specifically for digital SLRs.

Within this context, the lens’s performance is very impressive. It produces finely detailed images at all apertures (Although with somewhat low contrast wide open), focuses quickly and accurately, and handles well in a small, light package. In particular, it’s much sharper than typical DX standard zooms such as the Nikon AF-S 18-55mm F3.5-5.6 DX VR or Nikon AF-S 18-200mm F3.5-5.6 DX VR. The fast maximum aperture allows pictures to be taken hand-held in low light levels, while maintaining relatively fast shutter speeds to avoid blur from subject motion (A key advantage over image-stabilised, but slow, kit zooms when photographing people without flash indoors). The slightly less tangible aspects of image quality – such as resistance to flare, and the rendition of out-of-focus regions of the frame – are also dealt with nicely.

If the lens has one major flaw, it is a certain propensity to show chromatic aberration, of both the lateral kind (which can be corrected by the in-camera JPEG processing of the D90 and D300), and the longitudinal (Which cannot). To be fair the latter is a pretty well unavoidable with a fast prime, but the 35mm F1.8G DX suffers from it to a rather high degree, and in particular can give some unpleasant purple fringing effects if you’re not careful.

Overall, though, it seems almost churlish to complain about these flaws in a lens so inexpensive, which gives otherwise such fine results. It’s good to see Nikon finally addressing the lack of purpose-designed, inexpensive fast primes for DX format DSLRs, and we hope they – and other companies – continue with this trend. As it is the 35mm F1.8G DX is, for it’s winning combination of high image quality, large maximum aperture and low price, a lens which deserves to be on many a Nikon shooter’s shopping list.